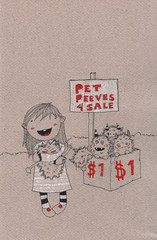 A “pet peeve” is defined as a minor annoyance, something that irritates you but often doesn’t seem to bother anyone else. It also refers to an annoyance that occurs frequently or repeatedly.

For instance, I have a friend who gets really annoyed when drawers are left open – something I’m quite guilty of doing. This same friend is impervious to one of my pet peeves: people who take bites of their food mid-sentence and then continue to talk while chewing.

We don’t consider pet peeves to be the same as complaints. This difference further illustrates how we use complaints as a way of either garnering sympathy or of bonding with others.  Since pet peeves are so minor, we expect we won’t get sympathy. And because they’re so personal, we half-expect someone wouldn’t even understand why we were annoyed in the first place.

But all this doesn’t quite capture another funny quality of the pet peeve: there’s something almost desirable about it. I love the Dictionary.com definition: “personal bugbear.” It’s as if our pet peeves express something about who we are, something that we’re a little bit proud of. I think we use pet peeves as an indirect, complainy way to declare what is important to us.

The next time you’re mentioning a pet peeve, try flipping it around to recognize what it is you’re valuing. For example, my pet peeve partially echoes what I learned about good manners. Mostly, though, it’s an expression of how much I value being conscious of what we’re eating while we’re eating it. So the next time someone takes a bite in the middle of a sentence, instead of noting my annoyance, I can mentally acknowledge how much I appreciate taking the time to taste my food.

© The No Complaining Project

Ready to take charge of your life?

Join our ever-growing NoCo community and get:

You’ll get support for every stage of your practice from first breaking your habit to taking action, gaining personal power, and improving your relationships.